How Raccoons Have Adapted to the Suburbs And Cities

In the animated movie “Over the Hedge” the animals of the forest do not understand why their food source has dried up, until it is explained to them by RJ, the wily raccoon.

“Half of the forest is gone,” he explains. But there is food and possibility within the suburb that has been built on the other side of the hedge.

American audiences had no trouble seeing the raccoon as a wily, resistance-leading mastermind, able to earn a living out of our trash cans. This is because we see raccoons doing seemingly impossible things every day in our back alleys, side yards, sewers, and trash cans in order to make their living in our neighborhoods.

Raccoons have proven to be very resilient as American suburbs have spread. With their amazing ability to climb trees, trash cans, and even houses, they can run and hide in places where many people might not even think to look.

Further, with their problem-solving abilities, raccoons have figured out that the average American household sets out dinner in one form or another every night. There really is not a food shortage if you can open the lid to every trash can in town! 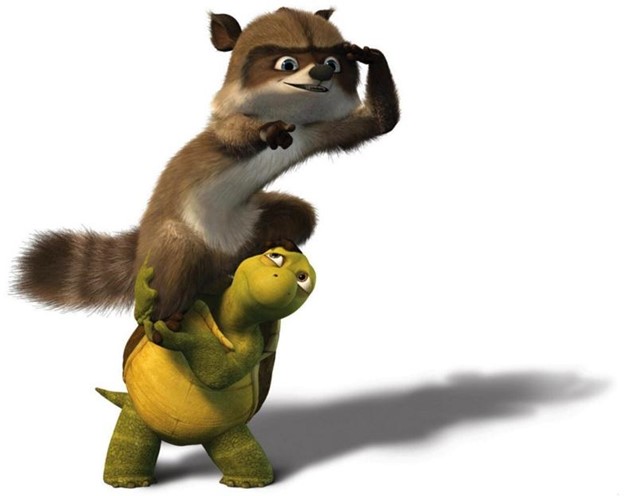 How do they do it?

Raccoons have an impressive intellect. Like many animals, they can remember productive food sources for a long time, with even second generations returning to productive dumpsters.

Further, they are nimble and mobile. This means that they can cover a wide range of ground in just a few hours every night. In their territory, they can run a first scan just by sniffing around dozens or hundreds of trash cans. Then they can use their climbing ability and their amazingly nimble fingers to open the lids on most trash cans.

Finally, they are great problem solvers. If they didn’t get the can open from the top, maybe they should just knock it over and watch the lid roll off? Or should they stand on the recycling bin while they pry your bungee cord off the lid of your trash can, then reach down inside?

They even use shelves in the storm drain as permanent homes, safer than the average tree in the woods, as it is protected from all but the most severe weather. Every way they scrounge food and survive in the cities, the raccoons that emerge from the storm drains in your neighborhood demonstrate that they have adapted to our environment.

Big Daddy Dumpster
4.4
Based on 28 reviews
See all reviewsWrite a review